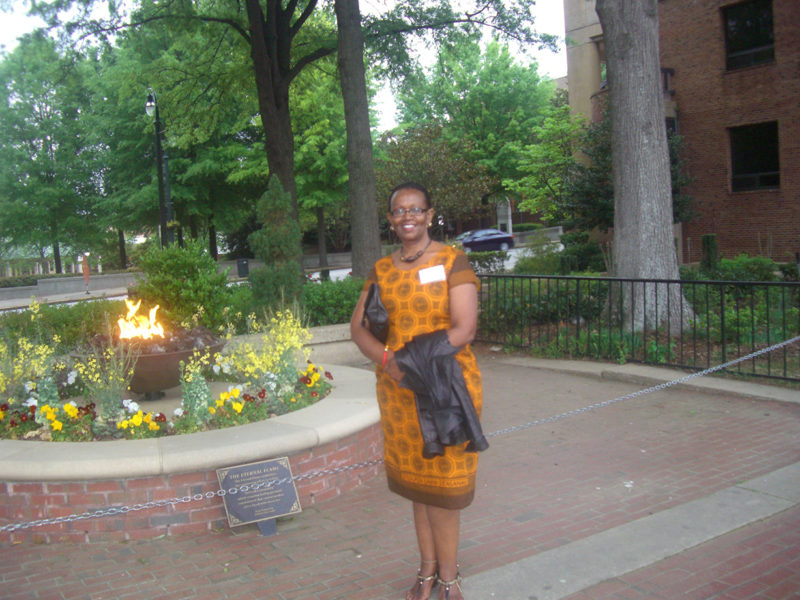 I began my visit with my arrival at Atlanta International Airport where I was transported to the beautiful Atlanta Airport Marriott Hotel venue for the Gala dinner event of the African Diaspora World Tourism Awards. The hotel makes you feel special as a guest, from the cheerful airport shuttle driver to the bellboy who escorts you to your room. I loved the Marriott experience and will surely stay at the hotel again next year.

The African Diaspora World Tourism Awards (ADWTA) was the first ever awards ceremony honoring trailblazers in black culture and heritage as an influence on tourism. It was designed in appreciation of the service and dedication of leaders from around the world who have significantly impacted tourism and inspired the exploration of black culture and heritage sites around the globe. The Awards ceremony was held on 27th April, 2013 in Atlanta Georgia, at the Atlanta Airport Marriott.

The Awards recognised those leaders in two parts:  “Who’s Who” and “Hall of Fame” in Black Culture and Heritage Tourism. The “Who’s Who” category recognized professionals who have done outstanding work in various cultural and tourism fields. The “Hall of Fame” category was for notables who have made legendary contributions that have significantly impacted black culture and heritage tourism development. 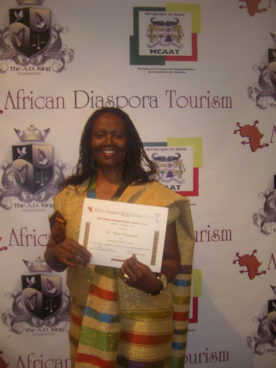 I was recognised for “outstanding contributions and dedicated service in Cultural Heritage Tourism”. Other notable honourees included the former Prime Minister of the Bermuda Dr. Ewart Brown.

The Awards gala ceremony took place on Saturday, April 27, 2013 at the Atlanta Airport Marriot Hotel and was hosted by Atlanta’s own most-noted broadcast journalist Monica Kaufman Pearson, winner of 30 Emmy Awards. The event was dubbed as the “Oscars” of the black travel industry.  Prior to this event, there was an Africana Extravaganza of cultural performances and an exhibition of a Travel Expo. The  three day Awards event was pre-kicked by the screening of Bob Marley’s granddaughter Donisha’s new Travel documentary Rasta: ‘A Souls’ Journey’ , included an Africana Extravaganza which showcased Caribbean music and cuisine, and performances by Maisha Furaha Theater group from Tanzania.

Kitty Pope is the brain behind the African Diaspora World Tourism Awards. These awards are produced by African Diaspora in association with the AD King Foundation, a non-profit organisation recognising the commitment, contributions and legacy of the late civil right activist and philosopher, Reverend Alfred Daniel King, brother of late Dr. Martin Luther King, Jr.

The highlight of my trip was a group bus tour to the Atlanta’s King Center.  Ask anyone planning to visit Atlanta what they most would like to see and they’ll most certainly answer Martin Luther King Jr. National Historic Site! The tour takes you where Dr. Martin Luther King Jr. was born, lived, worked, worshipped and is buried! My daughter Laura and I share love of visiting places of cultural heritage and historical significance, we were fascinated by the serenity of the Reflecting Pool surrounding the tombs of Dr. and Mrs. King Jr. where we spent some time reflecting on their legacy, we took pictures and said a prayer at the Eternal Flame which serves as a reminder of the Kings’ undying commitment to their beloved community, we counted ourselves most fortunate to have walked in the footsteps of Dr. Martin Luther King Jr.

The day after the event, a group of us braved an early morning downpour in search of some “Soul food”!  The doorman had recommended an ethnic eatery named “Big Daddy” which was easy to locate. We enjoyed baked chicken, mac & cheese, collard greens and yams!

Overall, I enjoyed the trip, loved the Atlanta Airport Marriott and look forward to the 2014 Africa Diaspora World Tourism Awards.

Community Tourism Guide Book
We officially launched the book on 8th August, 2015 during the Children for Conservation festival at the Hoima Cultural Lodge in Hoima District.
dowload
How to get involved ?
There are many ways you can get involved with community tourism and help empower rural Ugandan villages
Contact us